Man cannot discover new oceans
until he has the courage to lose sight of the shores.
André Gide

We speak many languages, there is song and music, we are surrounded by contemporary sound and noise and we have historical recordings. Music works and vocal performance are often first of all a dialogue with silence – and a perception of collaged layers of sound reality, an interweaving of texts and contexts, an act of listening and voicing of aswell inaudible movements and thoughts, traveling back and forth between moments in time.

Vocal improvisation can be experienced as the most immediate way of chant in resonance with space and audience, theme and situation. Performances forming in the current moment, in acoustic concert situations aswell as amplified and condensed by elements of live electronics, loops, soundscapes and lyrics. It sings.

This will be our reply to violence:
to make music more intensely, more beautifully, more devotedly than ever before.
Leonard Bernstein

The interweaving and toning synchrony of sacred texts representing different world religions and cultures symbolize an act of reaching hands between religions and spiritual traditions throughout times. Their harmonious encounter in the universal language of sound broaches the issue of dissolution of ideological demarcations towards a gesture of world peace.
The connection of the cultures´ textual expression is mirrored in the different worlds of sound meeting: classical vocalizing, archaic sounds and elements of world music and vanguard, various ethnical instruments accompanying the chants, and additional live electronics creating loops or pre-recorded soundscapes combining field recordings and instrumental voices.
The project has first been performed as a concert for voice and instrumental voices, and can also be drafted as workshop in collaboration with other musicians and singers.

PERFORMANCES FOR VOICE AND VISUAL ELEMENTS
compositions with scenic accents for voice and live electronics, i.a.:

„Remember this story“, Rabbi Bunam used to add, „and bear in mind what it tells you:
that there is something you can´t find anywhere in the world, and that there is a place where you can find it.“
Martin Buber, out of: The Way Of Man: According To The Teachings Of Hasidim

THE PSALM PROJECT
Scoring and performance of hebrew texts out of the biblical Psalter, for voice and live electronics /
vocal performance duration according to context

And those who were seen dancing were thought to be insane by those who could not hear the music.
Friedrich Nietzsche

SIDDHARTA SOUNDSCAPE / about the incidental music score to the staging of „Siddharta“: Music comprehends the possibility of being accessible to another realm, and to draft the interweaving voices of a sounding cosmos flowing through one another – so in the composition to the staging of „Siddharta“, the birds´ calls become aswell the monks´ voices in their gathering, and the singing of the human voice becomes likewise the river´s voice. The music is not intended to accompany and comment the story line, but enters the scene as an invisible teammate and engages in a living and perceiving dialogue with the represented persons. Therein, the music stands for our own accessibility to the essence of being, and occurs throughout the staging more and more as an audibly and inaudibly present element, and as a growing anticipation of what is called AUM or OM.
Staging of Herman Hesse´s „Siddharta“ by and with Heike Bänsch und Andreas Kunz, information and booking: info(at)heikebaensch.de

BEYOND BORDERS, composition for a stage performance by Heike Bänsch and Bruno Tendera, premiered in the framework of Mediensommerakademie Bonn 2011 on the topic of political journalism. BEYOND BORDERS is a memorial performance and homage to the worldwide media correspondents who have been murdered for political reasons. According to an indication by Reporters Without Borders, in the last ten years at least 695 professional journalists have been killed associated with their work.
Performance duration: ca 20 min.

There are hundreds of ways to kneel down and kiss the ground.
Mevlana Dschelaladdin Rumi

WHITE CANVAS – a project in duo and quartet – connecting archaic and modern sounds, songs and improvisation

WHITE CANVAS sounds many worlds, interculturally aswell as in the combination of individual musicians with different backgrounds.
Various videos and sounds of WHITE CANVAS productions can be visited on: www.white-canvas.de.

newhearlandrecords / ALL THAT MATTERS, this album is a remarkable piece of sound art and dedicated contemporary witness of our times, composed and produced by vocal and performance artist Rena Meyer Wiel. An audiobook interweaving field recordings, songs, lyrics, quotes and resonances to historical events, past as well as contemporary, with a general reflectiveness layered into compositions of collaged music becoming an own and personal language of reflectiveness. To the artist, this „contemporary sound art biotope“ represents a process of finding language for contexts of speechlessness.

All in all, the very diversity of collaged pieces leave a consolatory mark although not hiding away the eyes from the irresolvable questions facing us in the world. With the album ALL THAT MATTERS, Rena Meyer Wiel succeeds in combining contemporary sound art, the art of song, a reflective approach to present challenges and the listening to a multiply threatened world. Her sound thoughts concerning humankind carry a passionate vision for an integrated and healing perspective. 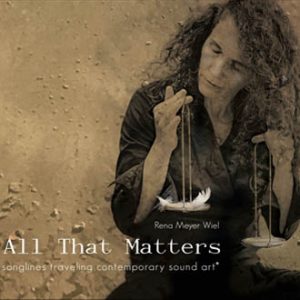 Available via newhearland records and Rena Meyer Wiel,
since september 2017 also for order via Amazon and jpc.

Rabbi Pinchas said: “When someone sings and can´t raise his voice, and someone else comes singing with him and raises the voice, then he aswell can raise his voice. This is the mystery of spirit inhering in spirit.”
Martin Buber: Tales Of The Hasidim

Vocal improvisation workshops and lectors´ trainings are educational formats surrounding an integrated study and work with voice and text, including body perception and spatial awareness. The Workshops are about perception and self awareness with the possibilities of vocal work, and of experiencing our „listening voice“. This phenomenon „listening voice“ exceeds the possibility to find and intone an inner expression of ourselves: Vocalization and finding voice also represent speech and song as a formless form of finding language itself. And this implies also: finding language as an expression of what we hear, and even only get to hear once we enunciate or vocalize it. As we sing or intone, we are not only in dialogue face to face with each other and with ourselves, but also with the sounding and silent connection and context we all together belong to. Workshops for vocal improvisation either focus on body and healing work or in form and content on literature resonating with contexts of contemporary events. In this regard, vocal work can be seen as a process of finding language or answers to that what leaves us otherwise perplexed in our world and life.

(…) Just don´t grow weary,
rather to the miracle,
silently,
as if to a little bird,
hold out your palm.
Hilde Domin

What does one thing have to do with the other – making music and being music? Rather a lot.
About facilitating our life melodies when turning dissonant or remaining in a state of caesura for a longer and considerable time, there is more information about alternative healing practice within my artistic work – room for integrative body and vocal work in the areas of dialogue, performance and therapy, with cranio-sacral S.E.L.F. waves and vocal teaching elements: www.earthmerged.com.